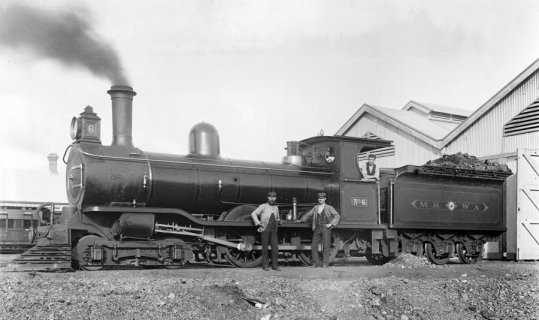 MRWA locomotive no B6 with a mixed train at Watheroo, ca 1910.

The company's railway ran between Midland Junction railway station, east of Perth, and Walkaway, southeast of Geraldton, and was built on a land-grant principle. It was one of the longest-lived privately owned railways in Australia, operating independently of the Western Australian Government Railways (WAGR) network for more than seventy years, from 1892 until its WAGR takeover in 1964.

The 446 km (277 mi) long route served 39 stations and operated according to a distinctly British practice.

Construction of the Midland Railway commenced in 1886 through a privately funded project during a period when funds were being raised to establish agricultural and mining railways. The Western Australian Government granted a land concession of 3, 319, 464 acres (13, 433.39 km2) to the Midland Railway Company following its registration in 1890. The concession of 12, 000 acres (49 km2) of land for every mile of railway completed entitled the company to select land between Midland Junction and Walkaway, near Geraldton, within 40 miles (64 km) of the new railway.

Between 1905 and 1918, the company actively pursued a scheme of land classification and settlement led by land agent and politician James Gardiner. The first subdivision was auctioned at Moora on 22 June 1906. By 1911, 16 subdivisions between Midland Junction and Dongara had been classified and auctioned. In 1910, Gardiner instigated and managed the Ready Made Farms Scheme, which provided cleared and fenced farms with houses to prospective settlers. The townsites of Coorow, Winchester and Carnamah formed the backbone of the scheme. The scheme was advertised widely to British citizens and was moderately successful, with 35 of the 58 farms sold by the end of 1915.

Between 1914 and 1917, business declined rapidly and the company operated at a loss. This was brought on by decreased revenue owing to the construction of the Western Australian Government Railways Northern Railway (which captured railway traffic from the Midland Railway), crop losses due to drought, the loss of men from districts owing to the First World War, and the imposition of new federal taxes. In 1918, the scheme was wound up.

The line was acquired by the Western Australian Government Railways in 1964.

In 2002 as the earlier original Midland Railway Company business was no longer existent, the South Spur Railway resurrected the name for the Restaurant train business that ran the Spirit of the West for a number of years.

The Midland Railway established its workshops and headquarters at Midland Junction. Later on, in 1906, the Government Railways relocated their workshops from its overcrowded site at Fremantle to Midland also.