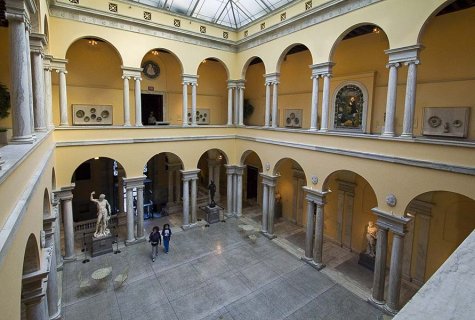 After about its first decade of being located at "The Athenaeum" (the first one of two structures to bear that name, a noted landmark for educational, social, cultural, civic and political affairs) at the southwest corner of East Lexington and St. Paul Streets. This was west from along Lexington Street from the facing the second Baltimore City/County Courthouse between North Calvert and St. Paul Streets from 1805-09 (and site in the entire block of the current third city courthouse of 1896–1900—now renamed 1985 for national civil rights leader Clarence M. Mitchell, Jr., (1911-1984). Because of the financial panic and economic dislocation caused by the failure and "run" on several collapsed Baltimore banks including the Bank of Maryland which closed prior to the subsequent "bank riot" of 1835, this first "Athenaeum" was destroyed by fire on February 7, 1835 and the newly-emergent Institute lost all of its property and records and subsequently was almost dissolved.