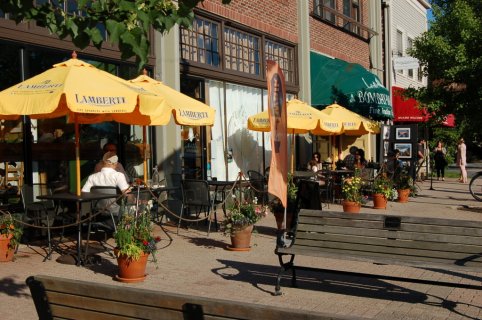 BRUNSWICK, Maine — Nearly a century after Brunswick students first drew pictures and sang songs at Longfellow Elementary School, the newly-renovated building will open later this month as the Robert H. and Blythe Bickel Edwards Center for Art and Dance at Bowdoin College.

The 48, 000-square-foot facility on Longfellow Avenue, which borders the campus, will provide a state-of-the-art venue for Bowdoin College students to study dance, painting, photography, sculpture, printmaking, digital media and other arts under the same roof for the first time.

Last month, the college announced that the converted elementary school will bear the name of a former Bowdoin College president and his wife. The honor is fitting, according to Bowdoin officials, because Edwards, who served as president from 1990 to 2001, was instrumental in revitalizing a focus on the arts at Bowdoin.

“Bob and Blythe Edwards made many significant contributions in their time here but none more important than their work to raise our aspirations in the arts, as well as our ambition for these programs and their facilities, ” Bowdoin College President Barry Mills said in a release. “As we prepare to open this center devoted to visual art and dance, we are delighted to be able to honor their legacy and to celebrate the progress begun on their watch.”

The original 1924 building was named for Bowdoin graduate Henry Wadsworth Longfellow. It was expanded and renovated in the 1940s and 1980s, according to the college.

The town took ownership of the college’s McLellan Building on Union Street in the trade, which is located a block from Maine Street and adjacent to a major new downtown development known as Brunswick Station. Brunswick plans to move its town offices, including council chambers and the community television station, into the building.

The building swap was controversial, with some town councilors and residents arguing that although the Longfellow School had been appraised at less than $1 million while the McLellan Building was worth $4.3 million, the town needed the funds from the sale of the school more than it needed the McLellan Building. Others said the town faced a space crunch, with the aging municipal offices on Federal Street and the town council chambers moving from building to building and finally settling in rented space at Brunswick Station.

Neighbors also worried about the building’s potential use — specifically that it could house a recreation facility — and the college eventually dropped its bid to include that as an allowable use and accepted a lower housing density, The Forecaster reported.

In a December 2011 split vote, the town council approved the deal, and Bowdoin began a $6.5 million renovation project in December 2012.

Among the more significant changes, the old gym was gutted and a second story added — the first to house a digital media lab and the second for the dance department.