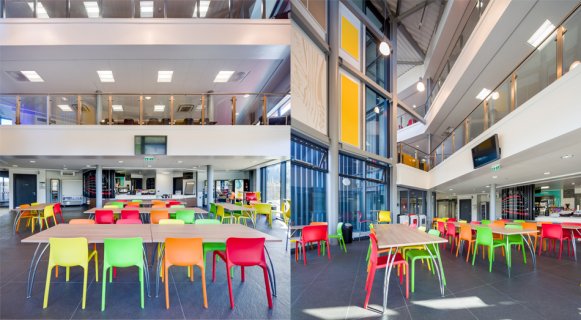 Exeter College of Art and Design

was an art college based in Exeter, Devon. Founded in 1854, it amalgamated with what would become Plymouth University in 1989.

The main building was located at Earl Richards Road North Exeter from the 1970s with some facilities based at Barts until the early 1980s. Graphics was based on Gandy Street in the old School of Art buildings until it relocated to the main site in 1984. The Printmaking department was initially located at The Mint. The Art College offered higher education courses including Foundation, BA (Hons) and Combination courses with the University of Exeter as well as MA/Pg diplomas. Disciplines were, Fine Art Ceramics, Graphics, Painting, Printmaking, Photography, Sculpture and 4D (Film, Video, Sound).

The Priory Press was introduced by Alan Richards and Bernard Beard in association with The Bartholomew Print Workshop in the 1960s and produces limited edition handmade printed books.

The School of Art was founded in Exeter in 1854 as part of the Royal Albert Memorial Museum and promoted by Edward Bowring Stephens a local sculptor. In 1858 decorative designer Kent Kingdon offered a £5 prize for a decorative design.

In 1951 The Exeter School of Art was renamed as the Exeter Central College of Art.

Clifford Fishwick (1923–1997) was appointed Painting Master in 1947 and was principal of the college from 1958 to 1984 a skilled painter having trained at Liverpool School of Art, he was a friend of Peter Lanyon and exhibited regularly with the Penwith Society of Arts. Fishwick is now regarded as an important, if underrated figure in post-war British painting and one of the better artists of the St Ives group.

In 1966 students print work was featured in an exhibition entitled "An Approach to Printmaking in Exeter" at The Whitechapel Gallery, London. In 1973 the College was renamed again as Exeter College of Art and Design and a new building opened at Earl Richards Road North on the outskirts of Exeter.

In 1976 painting tutor John Butler set up The Spacex (art gallery) which became a registered educational charity in 1990.

The college amalgamated with Polytechnic South West based in Plymouth in 1989 and in 2007 the facilities moved permanently to the Plymouth Campus. In 2011 planning permission was granted to demolish and redevelop the site to provide 39 dwellings with parking and landscaping.

@Pitch Perfect: My school Principal was sloshing this mad rush of students to take up n study random courses. She was encouraging ppl to take art seriously. Tue, 5 August 2014 10:08 AM

RT @solangeknowles: "......universities took to popularizing the art [of hip hop] in courses, most times without appropriate authority" htt… Tue, 5 August 2014 10:05 AM

@Drew Mautz: I was trying to avoid writing intensive courses and even though I'm an art major that's still pretty much impossible. Mon, 4 August 2014 06:05 PM